The UK’s Top Food Imports And Where They Come From 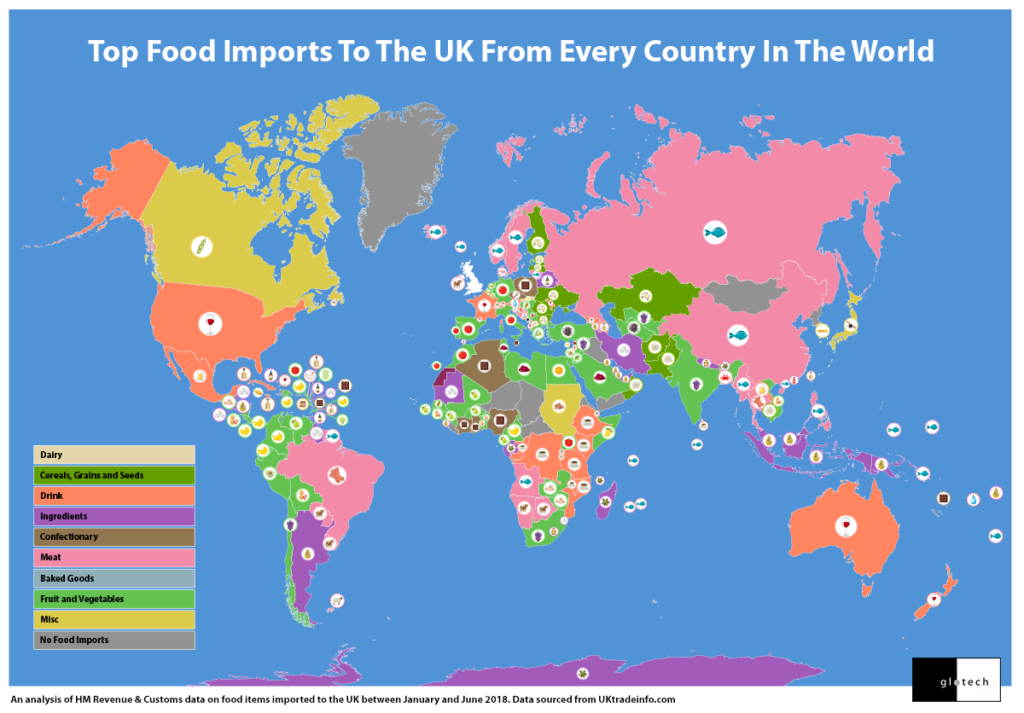 It’s no secret that the UK is a huge importer of food and drink, it’s not like we can grow exotic fruit in our allotments and we’re not exactly known for our vineyards!

Just how large scale our import demand is might still come as a surprise to you though, as it did to us when we carried out research on the top food and drink imports to the UK from 191 countries.

The import data for the first 6 months of 2018 was collected from HM Revenue & Customs and broken down into countries and categories. What it revealed was that we import a huge amount of food and drink from pretty much every country in the world.

From Botswanan beef to Vietnamese nuts, here’s our breakdown of the UK’s top food imports from around the world.

The UKs total import figures of food and drink from around the world are staggering.

Looking at the data in more detail, however, gives us some even more astonishing facts and figures. We’ll give you some highlights below, and you can see the full table of top imports by country yourself at the bottom of this page. 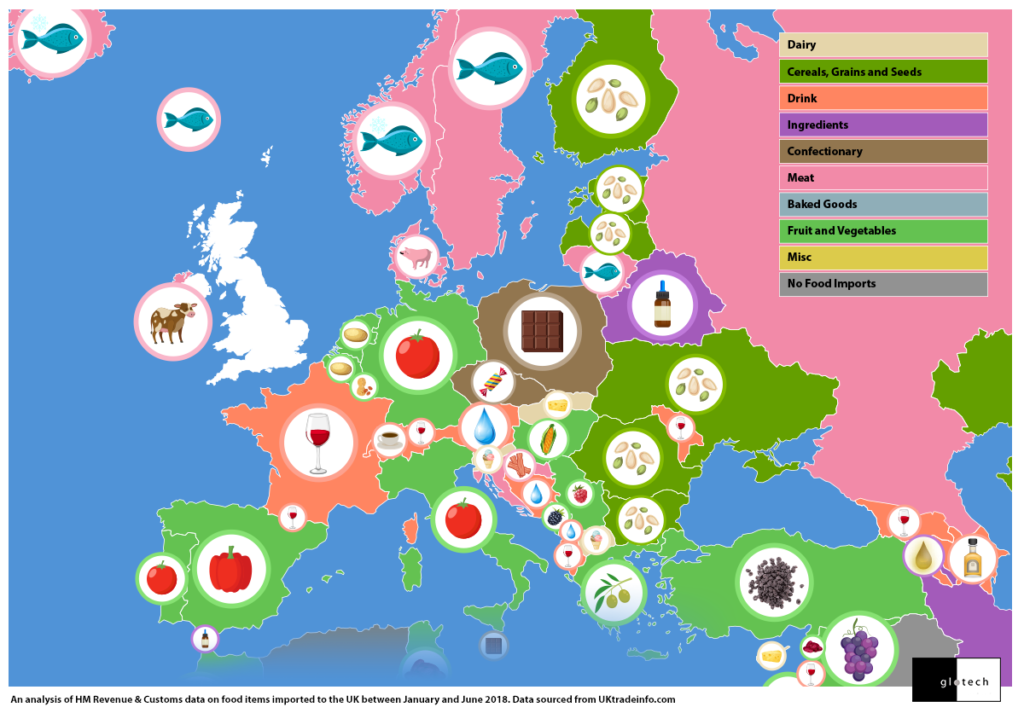 From Irish beef, French wine, and Swedish fish, we receive a variety of food and drink from our closest neighbours.

The biggest single product imports from countries on the continent were:

Other highlights of the top individual items of food and drink imports that came from European countries include the £52 million worth of seeds we got from Romania, the £12 million worth of olives and capers from Greece, and £3000 worth of Liechtenstein wine. 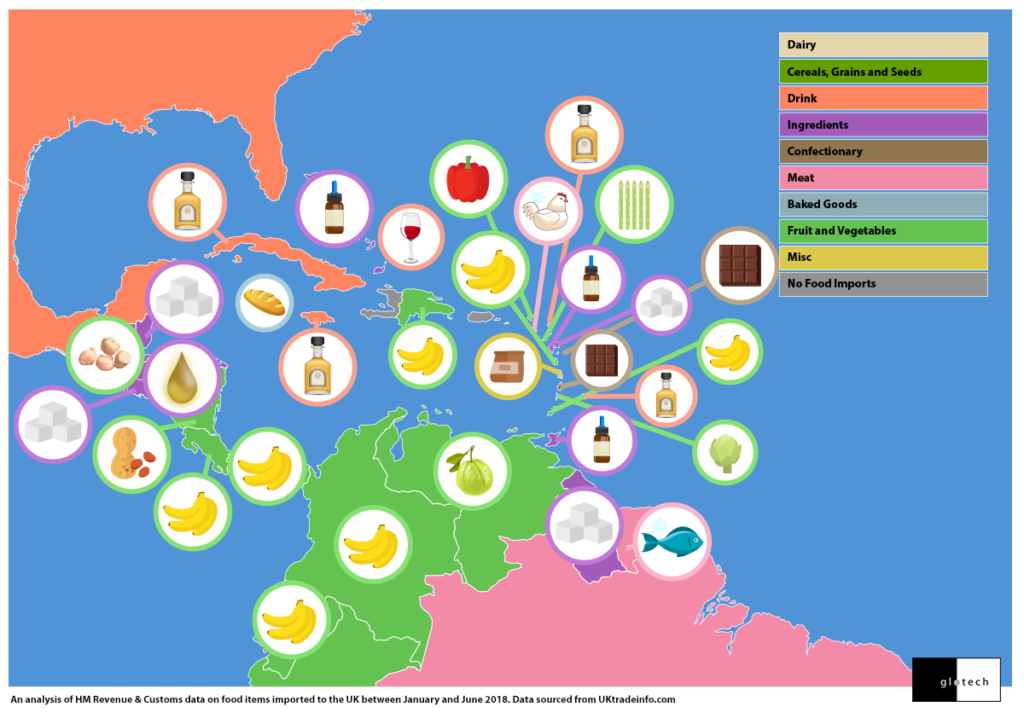 Zooming in on the Central American and Caribbean regions, we can explore which products we most commonly import from these countries, both mainland and islands.

Several of the smaller islands also provide us with a surprisingly high value of food and drink, such as  £1.1 million worth of sugar imported from Guadeloupe and the British Virgin Islands’ £1.2 million worth of sweets. 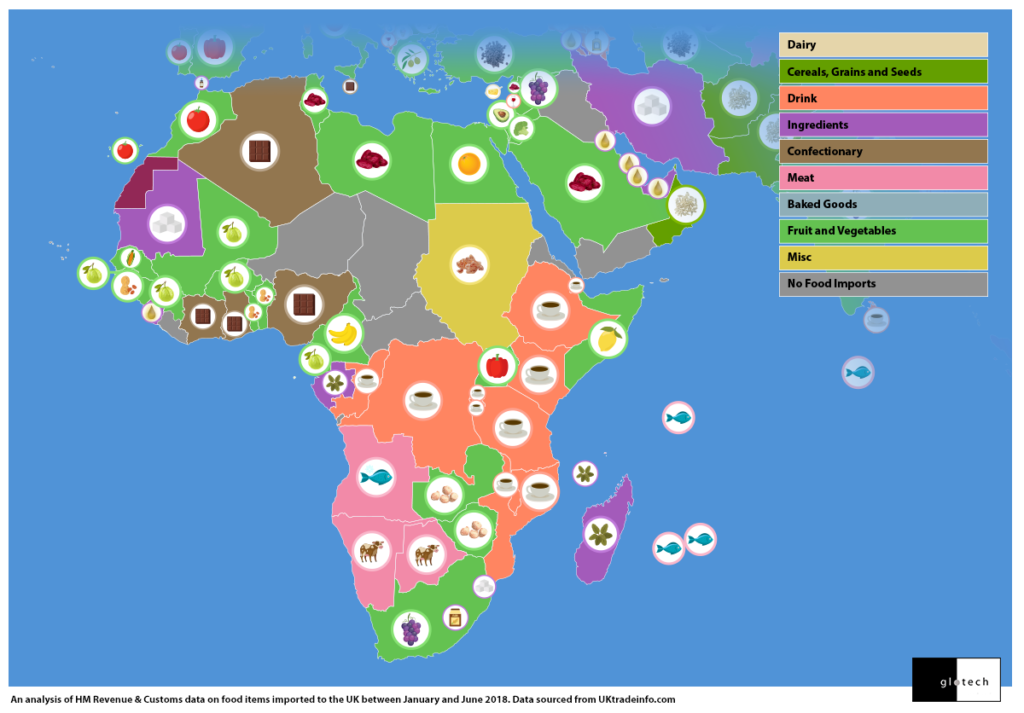 A closer look at Africa’s top exports to the UK shows that, although we don’t import any food or drinks from Niger, Chad, the Central African Republic, and Eritrea, the rest of the continent is a large provider of daily stables such as coffee, fruit and chocolate. 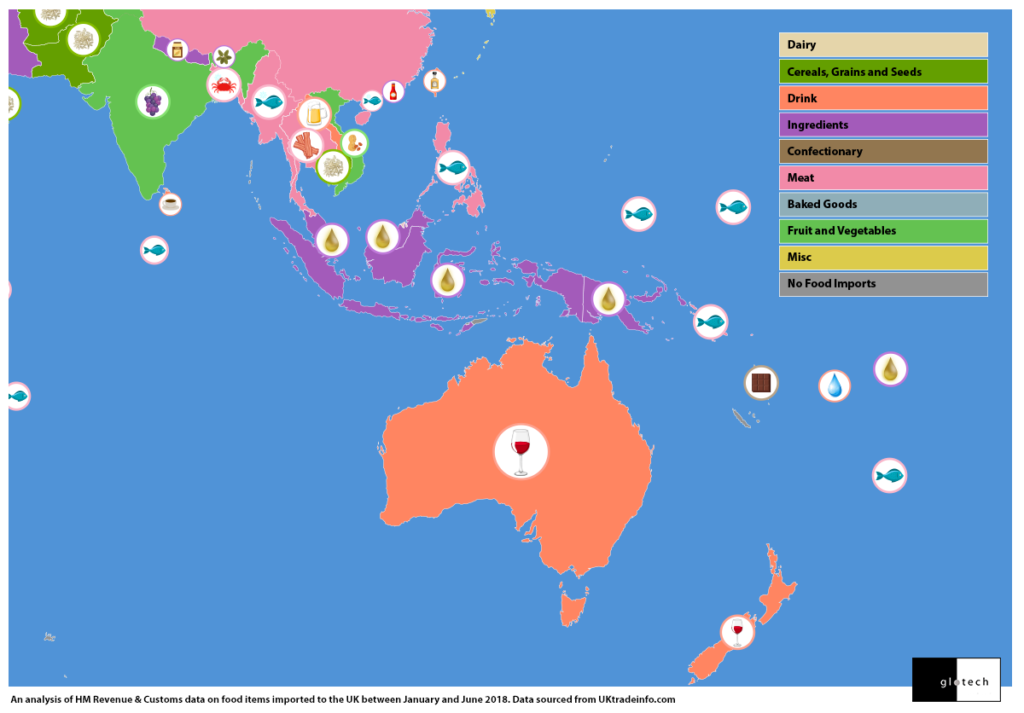 Looking at South East Asia and Oceania, we can see that a lot of oil comes from island nations such as Indonesia, Malaysia, and Papua New Guinea, while Australia and New Zealand provide a large quantity of wine.

First off – fruit and veg. An essential part of all of our diets, we’d be lost without the wide array of fresh, frozen, and dried fruit and vegetables that are now available on our supermarket shelves year-round.

Where does it all come from though?

Meat, another staple of the British diet, is also heavily imported. Chicken and beef especially come in from a host of different countries before being eaten in the UK.

Making up for their bronze medal in chicken provisions though, Ireland were the clear winners when it came to exporting beef to the Britain, making up a whopping 67% of the value of our beef imports.

Some other strange statistics emerged from our cheese-based research, including that we import £143,824,569 worth of cheddar cheese (it doesn’t have to be made in Cheddar, England!) from abroad.

Although the UK does have a thriving beer industry, with local breweries across the country and several national level manufacturers, we still get a lot of our beer from other shores.

Despite the prevalence of European brands like Carlsberg and San Miguel on our shelves, it’s actually Mexico who top our import list, with £51,934,573 worth of Mexican beer hitting our shores in the first half of 2018.

Ireland weren’t too far behind, however, with a total of £45,072,115 worth of beer coming from across the Irish sea.

Possibly the least surprising of all of the food and drink category results we got from our data was from wine. The top 10 exporters of wine to the UK reads just like the signs in the supermarket wine aisle, with France, Australia, Italy, the USA, and New Zealand making up our top five.

Very Interesting and specific. I would be interested in finding out what can be grown in the UK but in imported – perhaps due to the costs?

I am sure there is a lot of food that could be home grown but is not for political and financial reasons. Tariffs hugely affect the economics of what will and will not be grown.

As a resident of the Isle of Man, I’m happy to say the island provides immense variety if not quantity to both the UK and further afield.

Everything from rapeseed oil, meat and kippers to award winning Christmas puddings and cheese. This list is in no way exhaustive as there are a large number of unique and specialist manufacturers and growers who proudly produce their items for sale and export.

As a ‘come over’ I have shown that it is possible to grow produce from the Antipodean nations and have introduced new ways of producing seeds for distribution.

The population needs to recognise the miles and costs in importing goods and return to a more self sufficient culture. Our reliance on imports leaves us exposed for all multitudes of breakdowns in supply.

If the UK encouraged more support for the entrepreneur and promoted diversity in production then perhaps it will again be able to sustain the population as it once did.

Very interesting figures! Would be interested to read about the UKs top food EXPORTS too and where they go. Perhaps a good use of this data will be to analyse the likely impact a ‘no-deal’ BREXIT outcome will impact the UK in terms of increased costs (tariffs), changes to import and export demand and how people are likely to adapt (change diet, absorb increased costs, buy more British etc)

WE WILL CHANGE IN THE UK .

What’s up mates, pleasant paragraph and pleasant urging commented at this place, I am truly enjoying by these.

Would you be more explicit on which meats and vegetables are being imported.

That would be really nice but once you start drilling down into the huge amount of data provided there are too many categories to process them all in a reasonable amount of time. I agree it would be nice to do, perhaps one for the future.

I’m really curious to learn which organic food products are being imported in to the UK the most.
Does anyone have a table/ infographics/ articles regarding?

In your summary, you say you were surprised to see French wine imports twice that of Australia’s. However, if you divide the UK’s total imported value of French wine (£321,044,794) by the average price of a bottle of French Wine, you get a completely different picture.

When buying a bottle of French wine in the UK, the average cost is a staggering £26.50. Think about it. The high price is influenced by Champagne prices, that you are able to buy Lafitte Rothschild @ £1,250.00 a pop and that both Chablis and Loire Valley wines are far more expensive to buy in a supermarket than an equivalent Melbourne Chardonnay or Sauvignon Blanc. So in terms of volume (in other words the number of bottles), £321,044,794 divided by £26.50 = 12 million bottles sold.

Trust this helps to dispel your original surprise in your summary.

Thanks very much for that, really interesting.

I am trying to find out what tonnage of Frozen Farmed Shrimp from Vietnam comes into the UK per annum.
Any way of advising me ??