Over half a million lazy Brits NEVER vacuum their carpets!

We’ve conducted a new study into British cleaning habits and discovered that an estimated 688,987 Brits have never vacuumed their carpets! This is putting this lazy bunch at risk of allergies and infections.

We came to this figure once we discovered that 1.3% of those quizzed in our survey never vacuumed, which equates to over half a million adult Brits.

After we found out that 1.3% of Brits quizzed in our study

The Carpet and Rug Institute’s guidelines state that vacuuming should take place once a week, but one fifth of Brits struggle to follow this. [1]

Our survey of 2,000 Brits also discovered that five times as many men admitted to never vacuuming as women did. 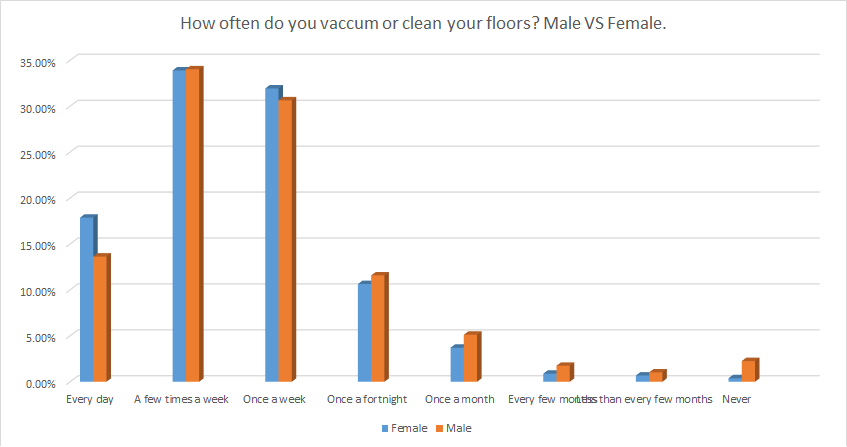 Those in Northern Ireland are the tidiest amongst Brits when it comes to hoovering, with a quarter of them vacuuming every single day.

Homeowners in the East Midlands however have been revealed to be the dirtiest when it comes to cleaning their carpets and rugs, with almost 6% stating that they only hoover “once every few months”.

The Vacuums Guide, an online resource which provides support on buying and maintaining cleaning tools, explains that people lose one million skin cells every day.[2] Alongside this, Philip Kingsley, a world renowned expert on scalp and hair care, states that people lose around 60 to 100 hairs each day.[3]

The founder of the Vacuum guide, Jason Roberts, has previously stated: “When you vacuum, you’re not simply cleaning your house or apartment for appearance’s sake, you’re also safeguarding the health of yourself and your family.

There are dozens of tiny microbes constantly floating around, which can cause a lot of problems for people with asthma and inhalant-related allergies such as hay fever. Dust mites, bacteria, and mould attack respiratory systems.

Infrequent or incomplete vacuum cleaning can cause severe reactions in people who are sensitive to pet dander, dust, and other debris that accumulates on carpets and rugs.”

One worry for tidy-conscious Brits is that previous studies have shown and scientists have confirmed that around 1.5 million dust mites exist in the average bed.

To make matters worse, each mite produces about 20 waste droppings every day, which disgustingly equates to around 20,000 particles of faeces in every cubic foot of air.

In addition to bugs and skin particles infecting our homes, three quarters of us admit we wear shoes inside our homes. This could result in Brits spreading bacteria such as E-coli, and salmonella like diseases all around our homes. So you can forget the three second rule for food if you don’t regularly clean your carpets – you could be risking food poisoning.

If your vacuuming is being held up by a broken hoover, we provide vacuum cleaner repair services so you never have an excuse to not tidy your home!