How A Microwave Works 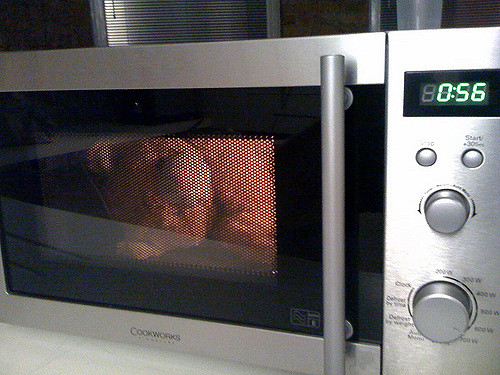 We look at how a microwave works

In modern times when we try to maximise our time to it’s fullest potential the microwave is a recent invention which has gone on to radically change the convenience of heating food to a whole new level.

The invention of the microwave

Back in the 1950’s a chap by the name of Percy Spencer, who worked for the Raytheon Manufacturing Company,was working with magnetrons. Back then magnetrons were primarily used in radar systems to help airplanes and ships find their route during bad weather or darkness.

One day Percy when to turn on the magnetron and noticed how the bar of chocolate in his pocket had melted. This gave him the idea that it may be possible to use a magnetron for cooking food and he went on to test his theory by successfully using one to cook some popcorn.

So the microwave, like many great inventions, was an accidental discovery!

How do microwaves cook food

Firstly inside the metal cavity of the microwave sits the magnetron which we described above. This magnetron takes electricity from the power source at the wall and turns it into high-powered radio waves measuring in at 12cm or 4.7in.

The magnetron (usually sitting on one of the sides of the microwave) blasts these radio waves into the main cavity of the appliance. The food which sits in this area is constantly spinning around on a turntable to help the food cook evenly.

To aid in efficiency the inside of a microwave is made from reflective metal. This helps the radio waves bounce off the walls and penetrate the food.

The radio waves heat the food by penetrating the molecules inside it. Moving molecules contain heat so the faster these molecules vibrate the hotter the food in turn becomes.

Do radio waves go through food?

There is a common misconception that the radio waves from a microwave somehow go through the food and heat it at it’s core. This is incorrect. In fact radio waves slow down considerably as they face resistance and obstacles (like a car at high speed against the wind).

Whilst the above is true in general terms it does get a lot more complicated than that. For example it is much easier and quicker to heat liquids than solids. Therefore certain foods, such as an apple pie, the inside could actually be much hotter than the pastry on the outside.

Are the radio waves from a microwave dangerous

Many people say that standing too close to a microwave or similar appliance or device is bad and can cause you problems. The truth of it is that a microwave is a sealed metal container from which radio waves cannot escape. For added safety microwave doors have interlocks (those metal grids with really small holes) to prevent any leaks through the door, and a safety feature which prevents the magnetron from running if you open the door.

Just because microwaves are designed to be safe it doesn’t however mean that you should abandon precaution. If your microwave works with the door open, has a fault, or you have cause for concern, book a microwave repair immediately.