Bacon Off The Menu For a quarter of Health Conscious Millennials

We recently surveyed 2000 Brits about their eating habits and found that the iconic full English breakfast is under threat.

Our survey showed that over 25% of people aged between 18–24 have removed bacon from the breakfast classic suggesting that Brits are looking for healthier options when it comes to the most important meal of the day.

This move away from bacon comes after a report from the World Health Organisation last November that linked the consumption of processed meat such as sausages and bacon to cancer.

In January, the Agriculture & Horticulture Development Board announced that while bacon sales have mostly recovered from the 17% dip in the weeks following the WHO report, they have still suffered a 4% drop in sales in the 3 months since the report was released.

The survey also revealed that while almost a quarter of Brits (22.6%) still “go to work on an egg”, trends in egg cooking show scrambled is slowly overtaking fried as the egg of choice in a full English amongst the more health conscious millennials. 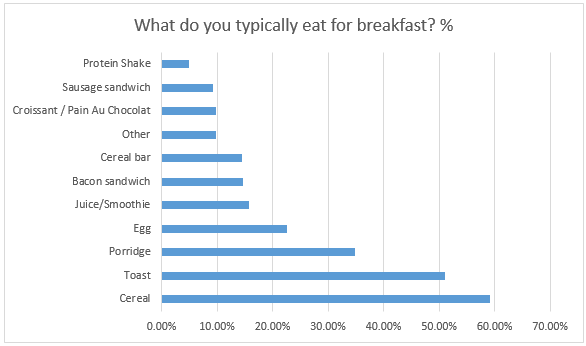 We asked Ursula Philpot, dietitian and senior lecturer at Leeds Beckett University about our findings and she said: “There is a link between packaged meats like bacon which are cured and wrapped and bowel cancer which is why we ask people to avoid and reduce their consumption when possible.

“We wouldn’t tell people to never eat bacon or sausages but to look at their consumption. If they’re eating it three or four times a week it might be worth reducing your intake but if it’s once a fortnight then it’s nothing to worry about.”

As well as looking at what Britain is eating, we asked about the time of day people are consuming food and found that women are much more likely to pick breakfast up on their way to work rather than eating before leaving the house, leading to over a quarter of women admitting to snacking throughout the morning. 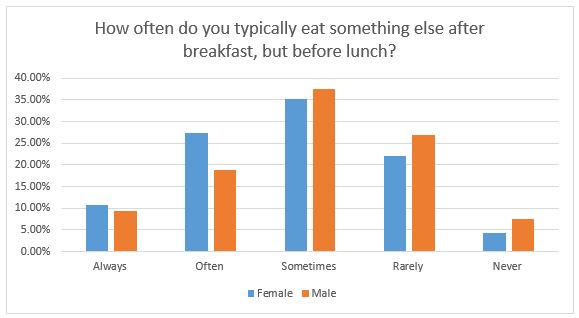 However, even though women claimed to buy their breakfast during their commute more often than men, they manage to spend 55p less on breakfast foods than men do each week.

Anna Daniels, a dietitian and British Dietetic Association Spokesperson commented: “With the growing emergence of social media teens and adolescents are becoming increasingly aware of their eating habits. There is a worry that this can be taken to the extreme as a little bacon in a full English occasionally as part of a balanced diet would be perfectly harmless.

“I think a slightly more concerning finding from the study is that more and more people are eating on the go. Picking up breakfast on route to work and not eating it at home. This leaves the consumer more likely to eat pre-packaged and processed breakfasts that may be higher in sugar and salt. A good breakfast will set you up for the day and ensures that you don’t reach for the biscuit time mid-morning”

The average Brit spends £6.88 a week on breakfast, which is quite low considering it is supposed to be the most important meal of the day.

That’s a knowing answer to a difulcfit question

In the future people will probably decide that cereal was the unhealthy thing all along.